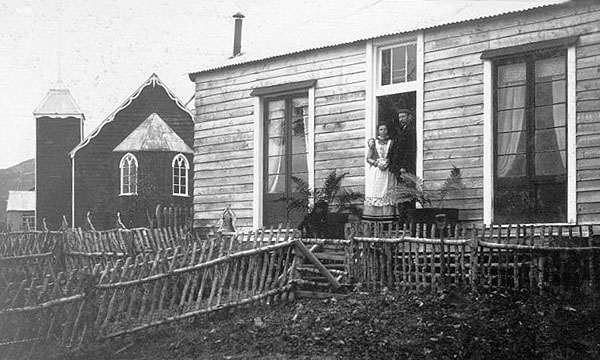 Anglican Mission, Tekenika Bay, Hoste Island, Tierra del Fuego
Pre-fabricated building ("The Stirling House"), 1898
This house has a long history, being the oldest-surviving building in Tierra del Fuego. Brought pre-fabricated from Britain, it was first assembled in 1869 at Ushuaia by the missionary Stirling. It was subsequently dismantled and reassembled several times, as the mission moved its centre of operations. Although abandoned in 1916, the house still stands at Río Douglas, on Navarino Island (see modern photograph).

In the photo, the missionaries Mr. and Mrs. Pringle are standing in the doorway. Cultural details, such as the curtained windows and potted plants, contrast starkly with the traditional indigenous dwellings. For more images of this mission, see the Tekenika Album.